Conventional wisdom has it that rat shooting is best done at night when the little critters come out to feed.

As a result, controlling the pests often requires an investment in infrared night vision or lamping equipment which, though undoubtedly effective, can be a little cumbersome; I don’t know about you, but most of my ratting trips involve more equipment than an assault on Everest.

And yet, there’s always an exception to the rule. Certainly, rats will come out during the day, especially if there’s a regular food source, but usually they are skittish and waiting for them to present a shot can be a test of patience. 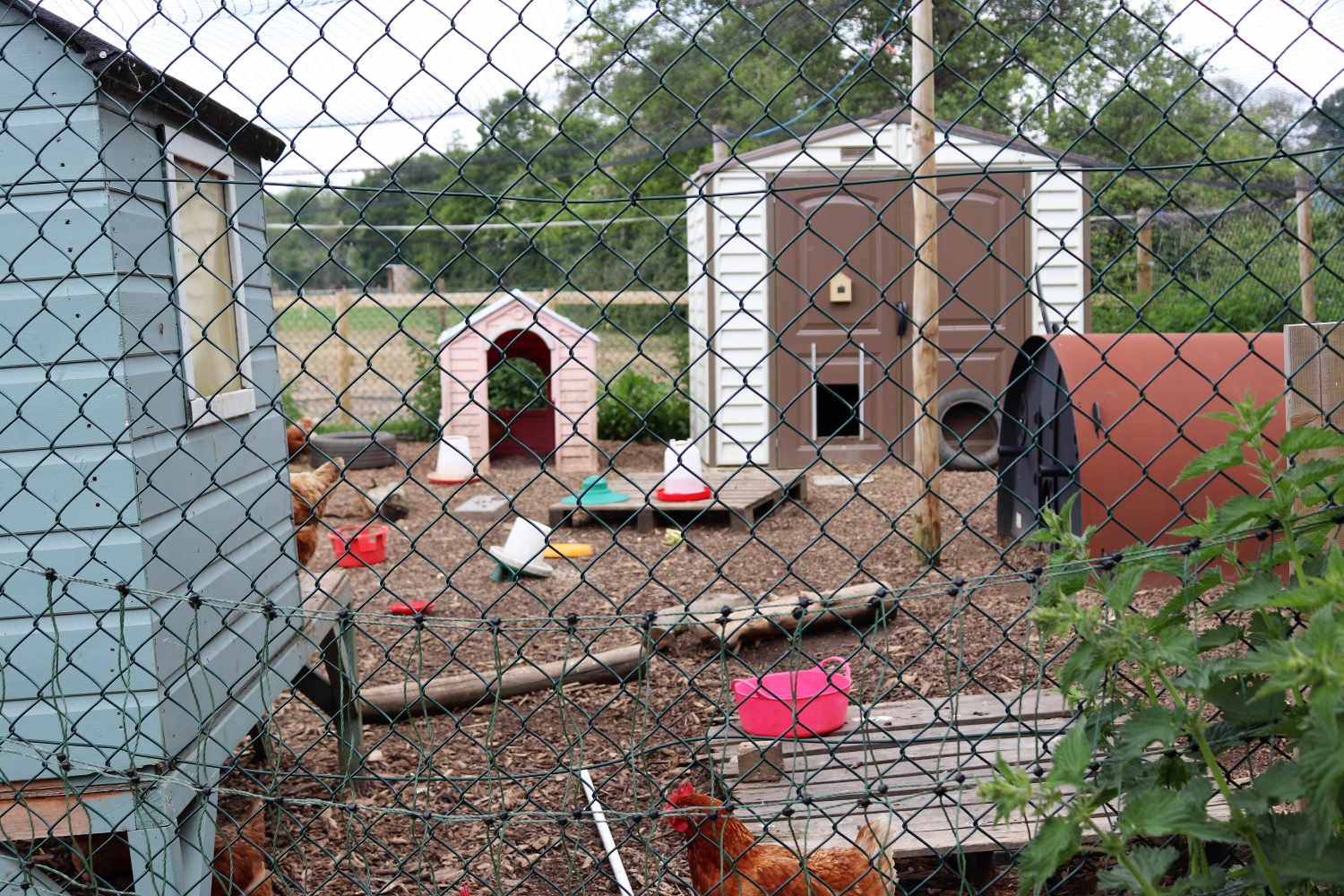 A great habitat for a few chickens. Unfortunately the rats like to call it home as well

One of my oldest permissions is a stable block on which the owner also keeps a few chickens. The coop sits alongside a stream which acts as a highway for the vermin. The rats not only present a health problem for the stable workers, but also cost a small fortune in terms of the chicken feed they eat.

Over the years I’ve shot hundreds of them, sitting back from the chicken enclosure in the dark using my Nite Site infrared gear. In fact, so successful was I that the rats all but disappeared. I congratulated myself on a job well done and resolved to visit the stables less frequently on more of a maintenance timetable.

Inevitably, of course, those maintenance visits became less frequent and, shame on me, pretty much stopped altogether about a year ago.

Fast forward then to a call from the owner a month or two back saying the rats had returned with a vengeance and asking if I could I come down and do something about it. Feeling suitably ashamed of my lax approach, I promised to drop in the very next evening.

In the past I’ve had landowners tell me they’re ‘over-run’ with rats and rabbits only to find, in most cases, the problem is an exaggeration. This wasn’t one of those times though; I could see dozens of rats in the chicken run in full daylight casually helping themselves to the free food.

I was confident that as soon as the sun went down, and the chickens put themselves to bed for the night, I would make a huge dent in the population. Two hours later, with only three rats on the ground, I was left wondering what had gone wrong. The rats had simply disappeared as soon as it got dark. Hadn’t they read the rules?

I put that trip down to a fluke – perhaps a full moon or an owl or something. But when I went back a week later the same thing occurred.

The great thing about sitting in the dark on your own with nothing to shoot at is that you have plenty of time to think. I realised that I was dealing with two completely separate rat colonies; the first was resident inside the chicken enclosure – I could see the holes around the hen houses. These were the rats that were feeding during the day.

The second community came into the enclosure from the outside, travelling down the stream. I realised that the resident rats ate their fill during the day and then hid during the night, and that the few I was able to shoot were the visitors. 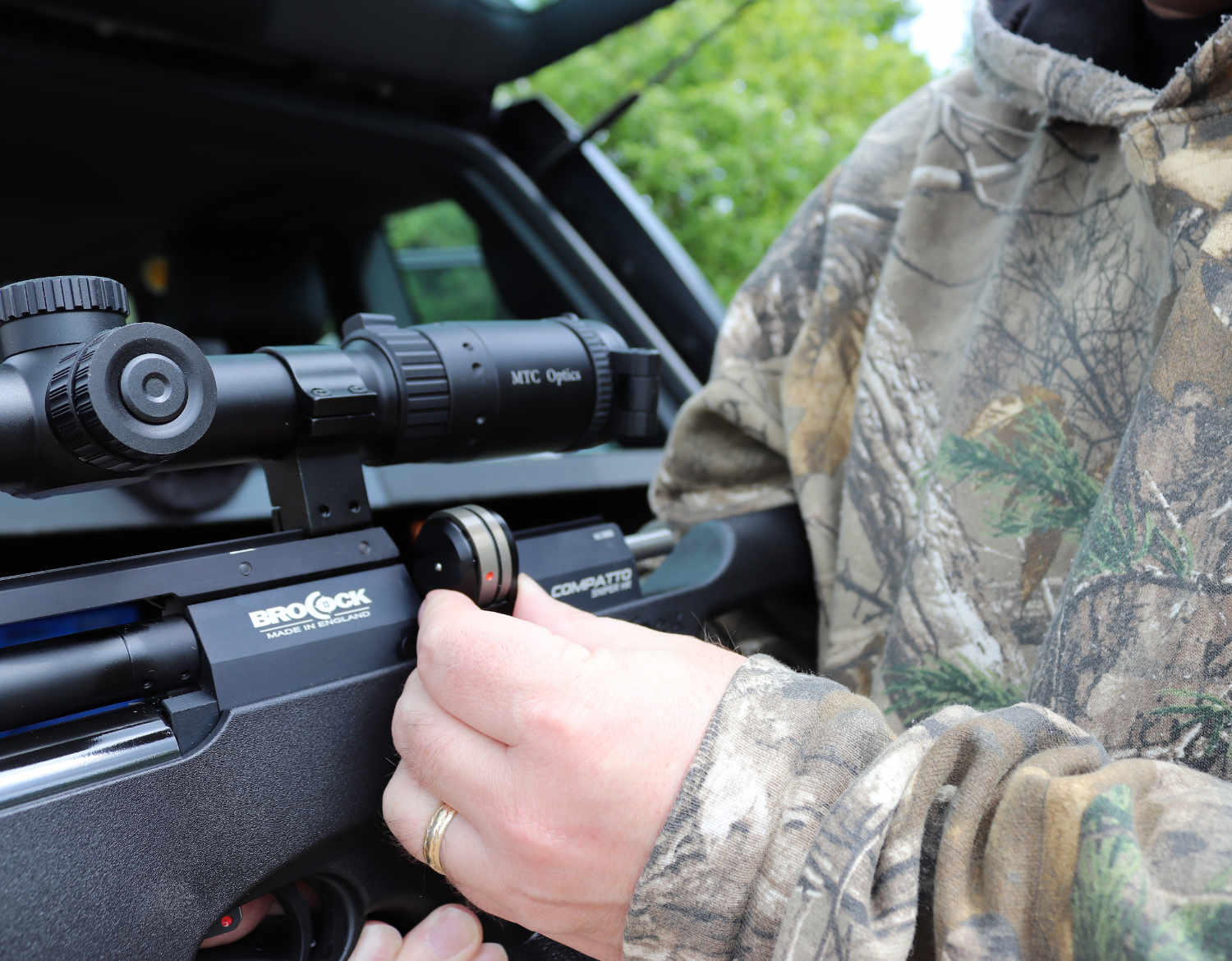 All this is a long way of explaining how I found myself back at the stables late afternoon yesterday. I’d agreed with the owner to cordon the chicken run and surrounding area off from horses and workers so I could shoot safely with a secure backstop, and the chickens were moved into a different coop for the day.

I set my gear up in the back of the truck. Legal limit 12 ft. lbs. rifles are more than adequate for shooting rats, especially at distances of only 15 to 20 yards and I opted for one of my favourite ratting combinations – a regulated Brocock Compatto Sniper HR which is mated with an MTC Optics Mamba Pro 2-12×50. 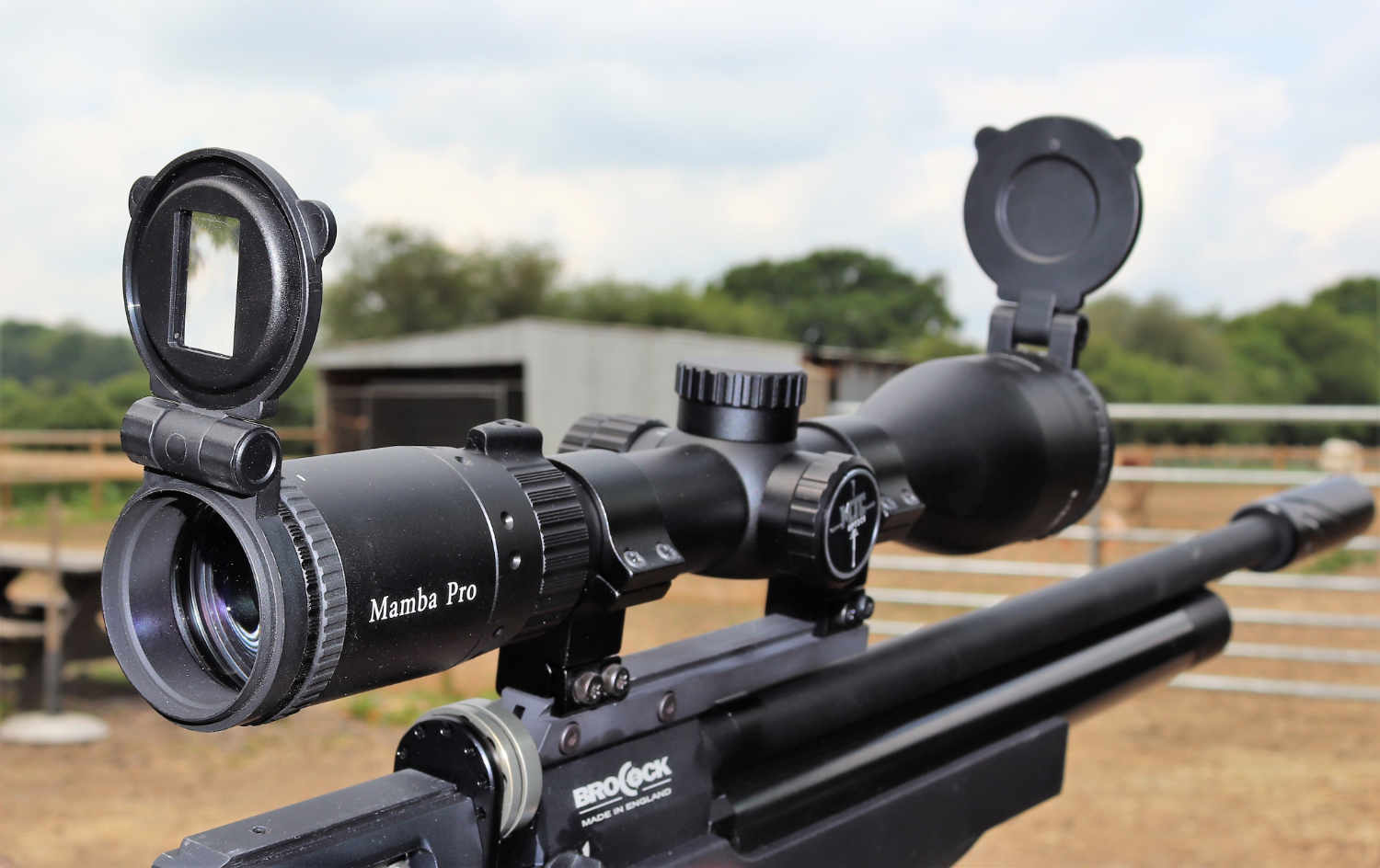 Mamba Pro 2-12×50 is packed full of features. Low magnification is great when scanning for targets, the huge parallax range provides the sharpest of images and flip up covers protect the lens.

As I filled the 10-shot magazine with pellets, I could see the rats scurrying around the chicken pen, running from under the hen houses to the food containers and back again. They were utterly un-concerned about being out in daylight. The run has a netting roof, presumably to stop any over ambitious chickens making a spirited bid for freedom. As a result, the run’s ratty inhabitants are protected from aerial predators. 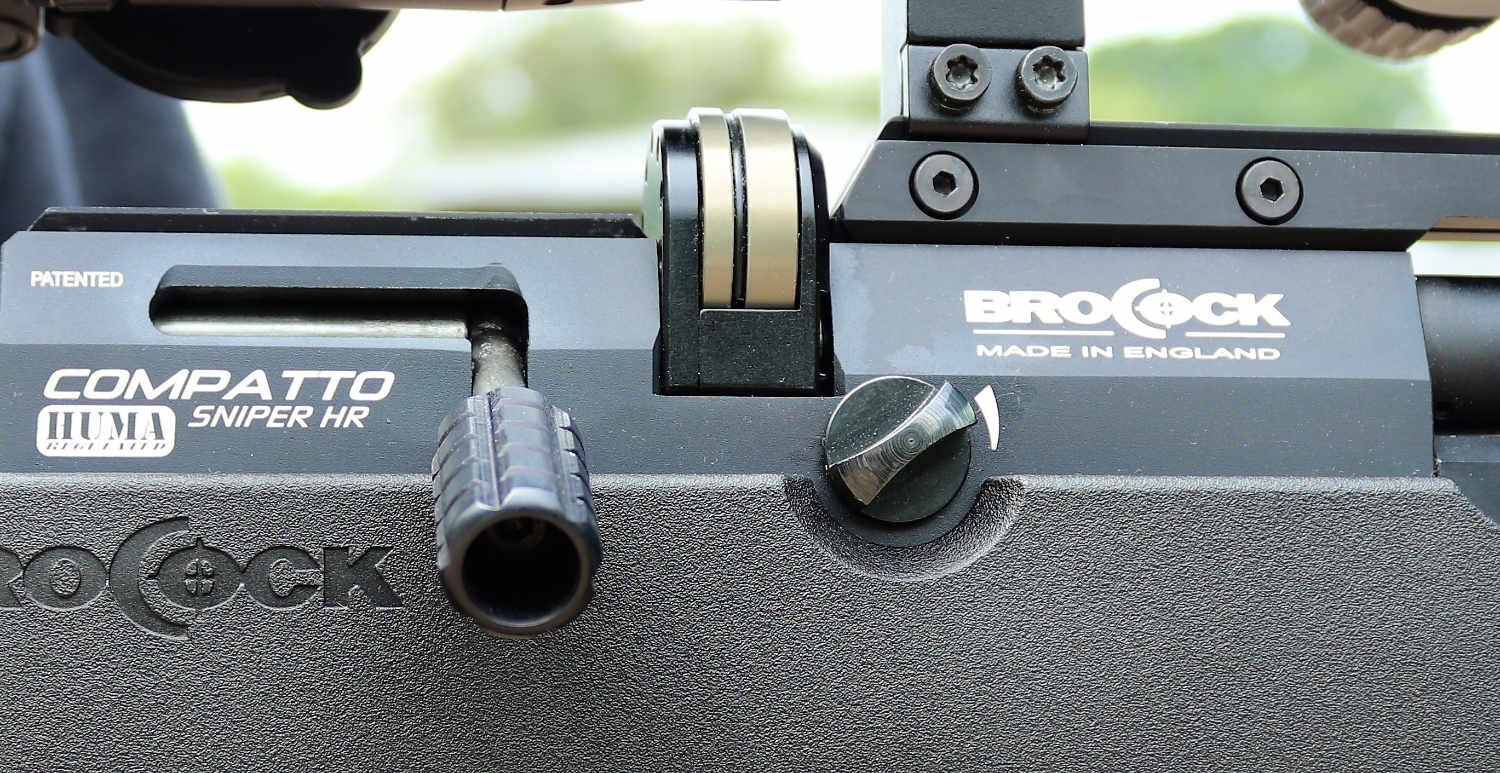 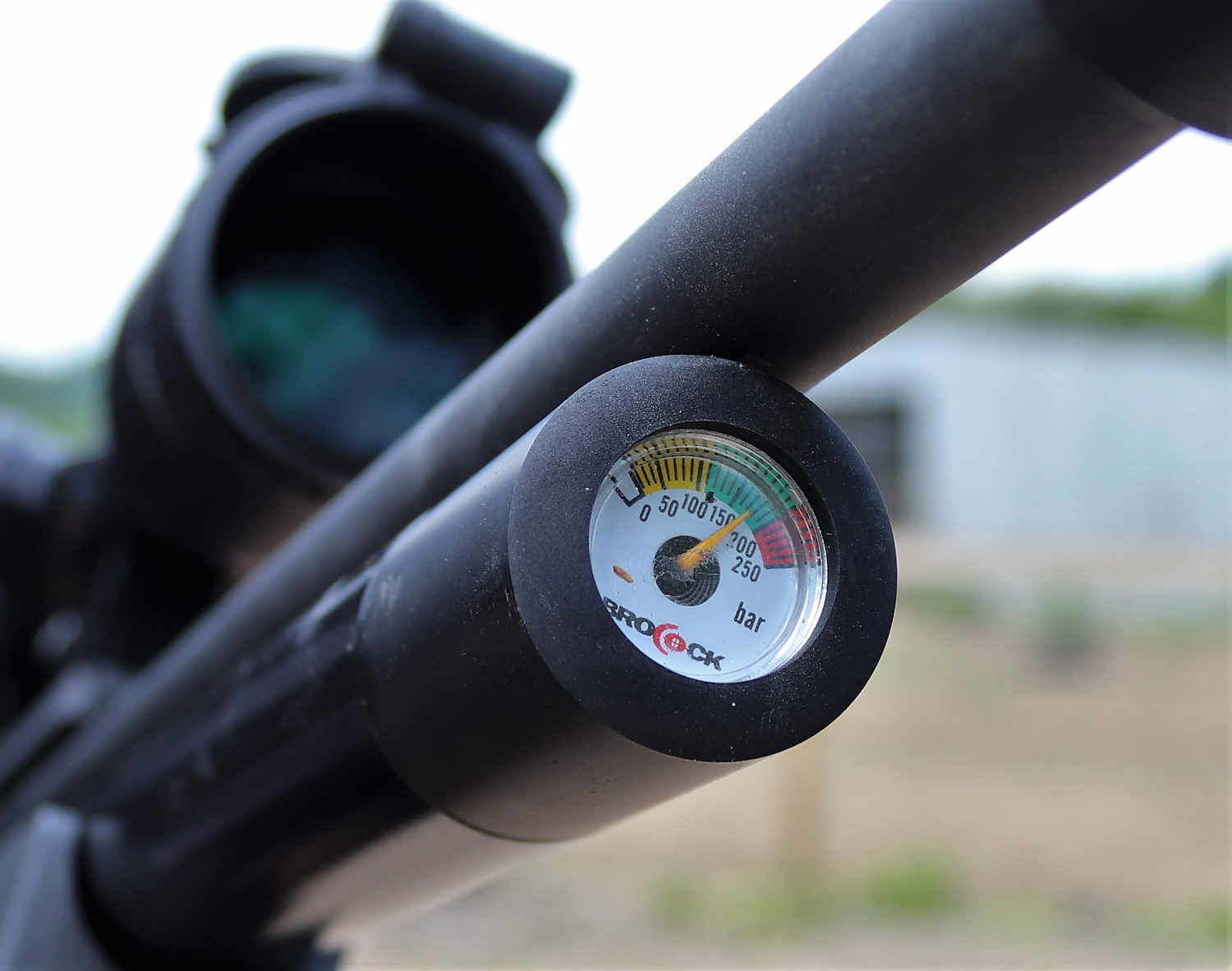 Plenty of shots from the regulated action and 150cc cylinder which has an easy to read manometer.

Now, I’m not suggesting they have looked up and worked this out for themselves, but clearly generation after generation had got used to being able to move around without the risk of being picked up by an owl or any other bird of prey.

I made my way to the field I planned to shoot from, carrying just a set of tripod shooting sticks. Taking shots means having to negotiate a path through weeds, an electric fence and the chain link chicken coop fence so I’d need to stay mobile in order to pick my shots.

Settled down behind the sticks, I raised the Compatto to my eye and peered through the scope. As I suspected, amongst the many rats were plenty of juveniles – evidence, as if any more were needed, the vermin were breeding prolifically.

I could also see that rather than disappearing underground, the rats were congregating under several pallets inside the chicken run before venturing out to raid the food containers. I knew, of course, that once I started shooting, the rats would only hang around for so long before disappearing. I hoped to prolong their presence by not targeting those under the pallets and instead waiting for a rat to separate itself from the others. 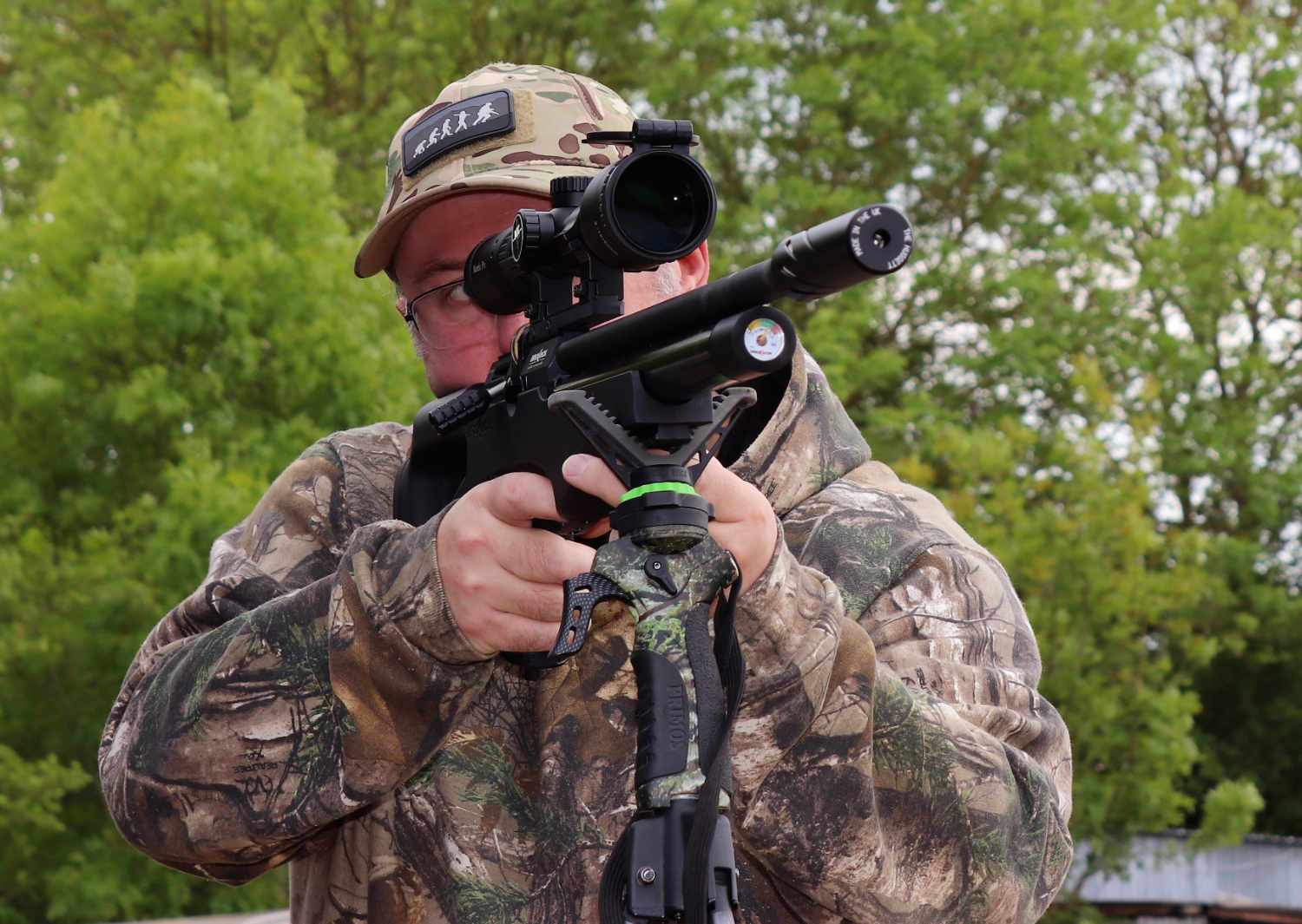 After a few minutes I spotted a big adult that was isolated at the back of the run. It was chewing on a cob of corn and presented a stable target no more than 18 yards from me. Resting the Compatto on my trigger sticks, I lined him up on the Mamba Pro’s SCB2 reticule. I’ve zeroed the set up at 20 metres and the aimpoint is the same at 10 metres.

Sure enough, the Compatto sent the pellet on its way and the rat rolled over on its side, paused a few seconds and then started twitching before coming to a rest on its back. I could see through the scope the pellet had hit squarely on the rat’s head, killing it instantly.

Any concerns the other rats would scarper at the sound of the rifle or the sight of a family member doing the funky chicken were dispelled as they simply carried on as before. I was able to take another couple of isolated rodents before the main pack sensed something was up. That was the trigger for a change in tactics and I started picking off rats as they sought shelter under the pallets and other items in the chicken run. 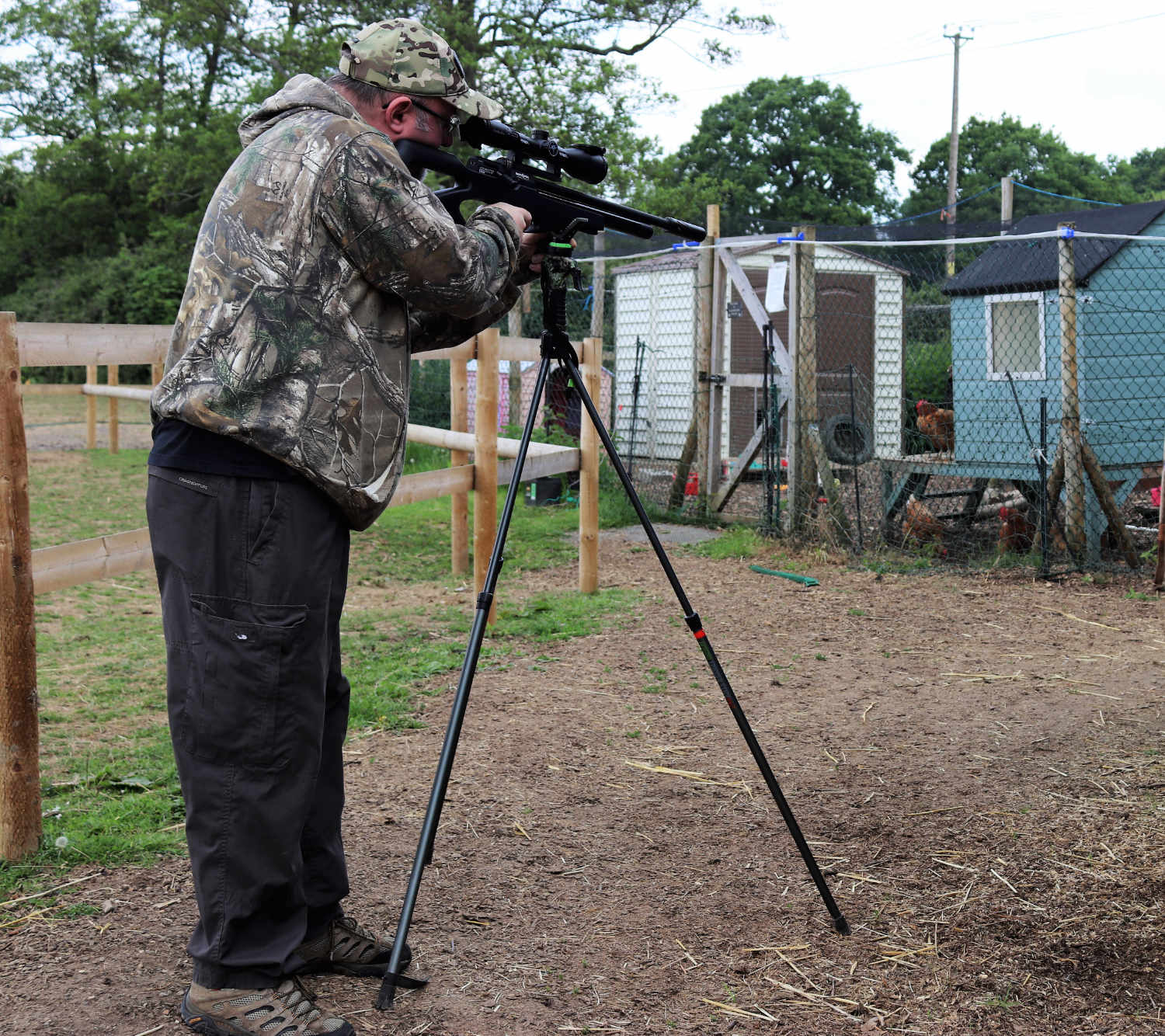 I re-filled the Compatto’s magazine and searched the pen for another target, no longer selecting adults over juveniles. I had to re-load for a second time and was just into the third magazine before the rats finally decided they’d had enough.

I’d been shooting for just over half an hour and knew I missed with only a few shots and the floor of the pen was littered with dead rodents. However, rather than pick them up, I returned to the truck for a cup of tea, hoping the rats’ urge to feed would bring them out again after a respite.

Dusk had well and truly started when I went back again to see if the rats had regained their confidence. Sure enough, I could see several of them raiding the food containers once again. However, this time they disappeared as soon as I took a shot and although they re-emerged, it took them longer to do so each time and eventually I called a halt. 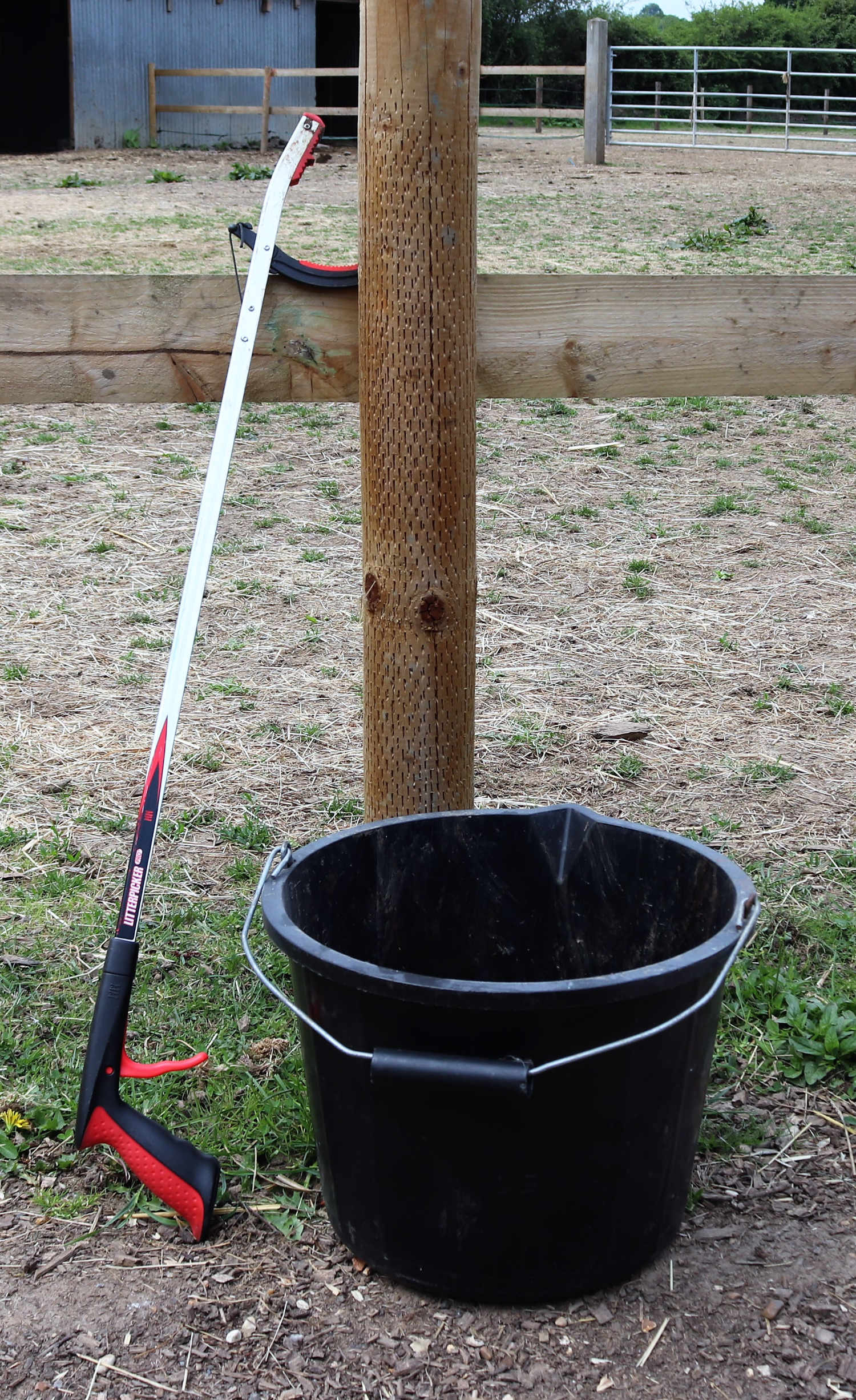 Be prepared to tidy up after a rat shooting session. A long-handled litter picker makes an unpleasant job a little more bearable.

In the last of the day’s light, I grabbed my bucket and litter picker from the back of the truck and collected 23 dead rats, knowing that several others had either managed to get underground or had been dragged there by hungry companions.

Needless to say, the owner of the stables was delighted, as was I, but we both knew the whole exercise would have to be repeated many times before the situation is under control again.