Unless you follow a fixed-distance target discipline, such as 10m match shooting, chances are you’ll be aiming at targets across a wide gamut of distances – close, far… and lots of ranges in between! For the trajectory of a pellet or slug fired from an airgun, you will be forced to make an aiming allowance for any distance that is closer or further than the scope’s zero range.

The question is: do you aim above/below the target, or adjust the elevation turret of your scope?

‘Aiming off’ is made easier with multi-stadia crosshairs, like MTC’s SCB2 reticle, but some shooters still prefer to ‘dial in’ a new zero for every range so that they can always use the central part of the scope’s crosshair.

Higher magnification scopes with adjustable parallax particularly suit the ‘dialling-in’ method because of their P/A range-finding functionality. You can also range-find by ‘bracketing’ the target when using multi-stadia reticles like the SCB2.

Of course, as with the ‘hold-over’ method, the ‘dialling-in’ system still requires the shooter to do their homework beforehand – you need to work out what setting the turret must be turned to for each, different distance. Usually, settings are pre-determined at five-yard/metre intervals between the closest and furthest ranges at which targets are likely to be encountered.

The scope’s elevation turret will need to have first been physically set to ‘0’ at the range you consider your primary zero distance, say 30 metres. You will then take a note of the elevation turret’s numeric setting required at all the other five-metre intervals you want to accommodate – perhaps 15m to 55m. 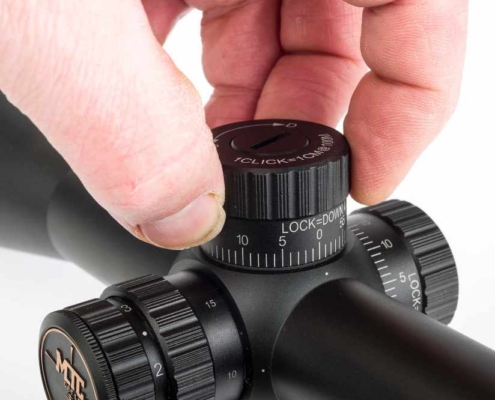 Many scopes offer the facility to ‘dial in’ a new zero on the elevation turret – so that you always aim dead-centre on the crosshair, regardless of the target’s distance 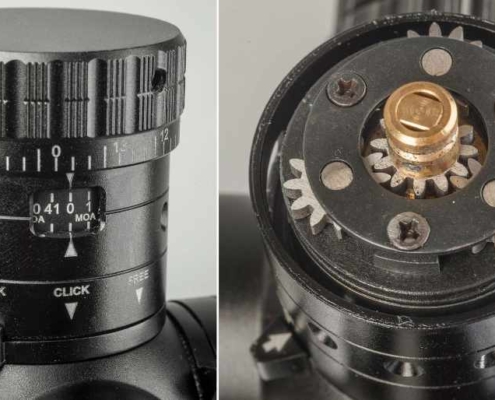 The Smart Turret system on the MTC Viper Pro range is very sophisticated! It can be clicked, spun freely and locked, while you view its customisable ribbons through a special window. It also sports a 3:1 gear mechanism!

So how does it work? Well, if you have zeroed the scope for 30m, but your P/A ring indicates your target is at 40m, you will turn the scope’s elevation turret from ‘0’ to, say, ‘3’… or whatever number you have previously worked out is correct for 40 metres.

It sounds pretty foolproof – and, for the most part it is. But there are traps to watch out for. Some ranges closer than zero will require the elevation turret to be turned down. As most scope turrets will not differentiate between ‘-’ or ‘+’ numbers, you have to be careful not to then dial back to ‘0’ from the wrong direction. The same applies when you may have dialled up from zero, of course – a turret that’s a full rotation out will spell disaster for the next shot!

And you will probably need a ‘cheat-sheet’ to refer to as it’s too difficult to remember what turret setting is needed for every distance. For speedy reference, some shooters insert this into the cap of their flip-up scope cover. Others may even hand-paint actual yardage markings on the turret itself.

Which leads nicely on to the Smart Turret equipped to MTC’s Viper-Pro scope models.

This turret is smart in every way. Firstly, its sophisticated design allow for click-stop and free-spin adjustment, and it is lockable to avoid inadvertent turning of the turret from its set point.

Secondly, it sports a 3:1 ratio gearbox. In practice, that means three rotations of the turret translates to just one spin of its reference vernier – so there’s very little chance of you returning to zero ‘from the wrong direction’.

Thirdly, its vernier is viewable through a small window so as not to leave you in any doubt what setting the scope’s turret is on.

And fourthly, the vernier’s ribbon (or range tape) is customisable to show not only adjustment in numbers, but even MOA, MILs or yards/metres of your choice!

This means you can customise specific vernier ribbons for specific pellet/power/zero set-ups, making it ideal for those who switch between, for example, light and heavy pellets, or day- and night-time scope zeroes. Just select the correct range-tape for the job – it’s that easy!

By using one of the many trajectory-calculator apps available – or even inputting basic data into the free MTC Ballistic Calculator – you also have the added confidence that your customised range tapes are specific to your exact combo. To see the Smart Turret in action, watch this short video from MTC’s official YouTube channel. 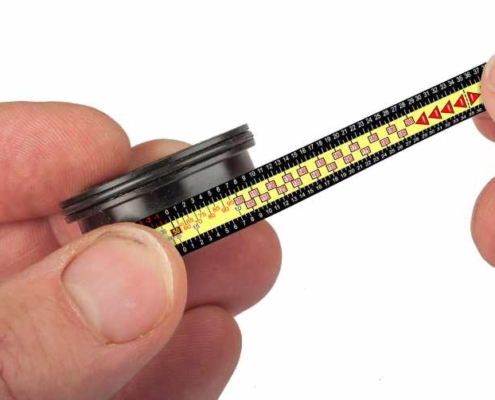 In combination with readily-available software, MTC’s Smart Turret system lets you customise range tapes specifically for your own rifle/pellet set-up